The words “busy” and “spring” are synonymous on a farm.

Fields are drying quickly and the cover crop wants to be “harvested” and turned into the soil, creating an instant carbon boost helping with fertility and soil structure. Once mowed the debris from the crop digests for several weeks or until it’s structure is all but gone allowing the finished bed to be even and smooth. 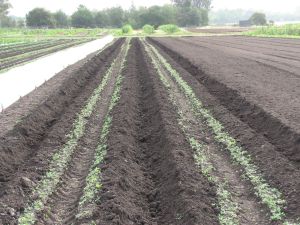 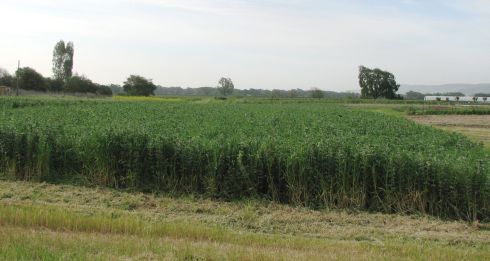 Then the field will be rototilled. Sometimes when a field is tilled, the soil moisture is still too high to plant. To speed drying, furrows are made with shovels on the tractor.

Once a field is flat and weed-free, it’s ready to be planted. And there are many transplants lined up waiting for space.

The whole crew works the plantings. The irrigation has to be set up. Most everything is on drip lines which have to be pulled and hooked up to the water supply. Some crops require covers. For example, the first tomatoes and peppers (Padron) are in and covered.

Additionally, many things are being harvested at this time of year, adding to the day’s diversity and the community’s health. We are so happy to be able to grow this excellent food.

The artichokes are finishing.

These carrots on drip lines are just beginning to be harvested.

Picking peas and sage in flower

Raspberries with fava beans in the background

The first peppers in the field have their own greenhouses to give them a little boost. 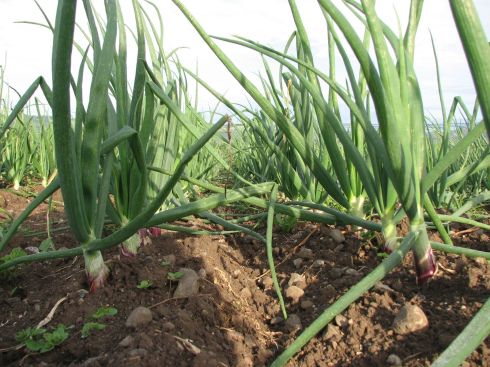 Even the sweet peas at home are growing like crazy. 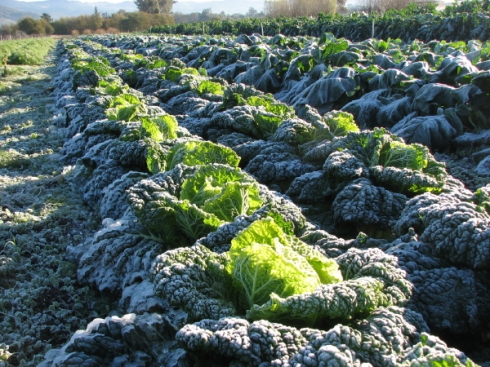 This savoy cabbage will be especially sweet!

The weather is much cooler than we are used to here in Sonoma Valley. It’s predicted that we will have more than 10 days in a row of below freezing temps. Everything is compromised with weather like this. We’re trying to keep water running as cold crops fare better when the ground is moist but the pipes are frozen well into the day. Couldn’t get the water on until after 2 on Friday.

The crew is starting later, wearing more layers, working in the greenhouse as much as possible, but no denying it’s no fun harvesting vegetables in this weather.

Recent transplanted Red Russian kale is stalled, but not dead.

The fennel fronds have diamond necklaces.

The lacinato kale is resilient but certainly not growing in this weather.

Some of the most vulnerable beds are hooped and covered with remay. 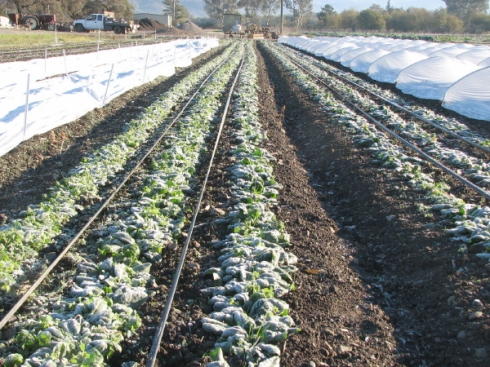 The spinach should grow out of this freeze

We don’t quite know what to expect with our artichokes.

The cauliflower is nestled down under lots of full, icy leaves. 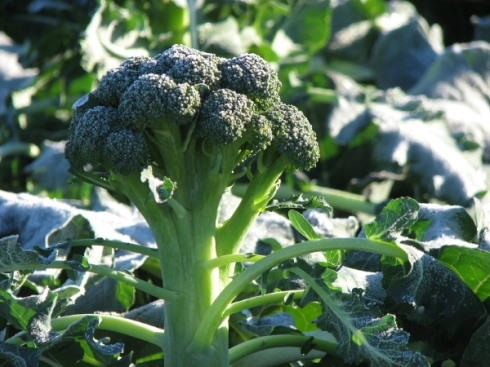 I think this broccoli wants to be picked!

So much is happening. The weather, the great dictator of what happens on the farm, has been very generous to us. It must have been over 70 degrees F. today. Beautiful. We’re planting spinach, turnips, radishes, lettuce, pea seeds in the field. Once planted, some are covered. We may plant beets and carrots this week.

The greenhouse is starting to really fill up with freshly planted flats, some covered, some not. The first planting of tomatoes have blasted out of their flats and pushed the remay into puffy pillows. So have the peppers. Broccoli, cauliflower, cabbages, fennel and onions were all started in the greenhouse flats last week or before.

Lettuce, chard, kales and collard are all being transplanted. Once in the field, they are also covered to insure against wild weather swings. We hope they will feel secure enough to take off.

The irrigation system is engaged with the warm dry weather. The final bit of field turning is almost complete as the pipes are hooked up.

There is an experiment in the new field with planting oats, wheat and barley, side-by-side. Which will be the most beneficial to this soil? We’ll see.

The signposts are all that remain of last summer’s Farm Stand.

Brussels sprouts, covered bed and beyond the farm 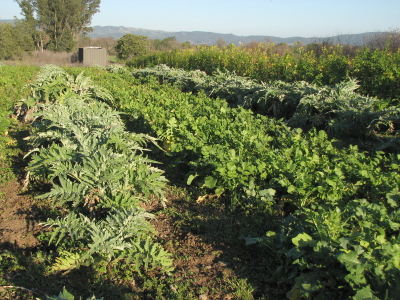 Daikon radishes are being harvested out of the cover crop between the rows of regrowing artichokes. 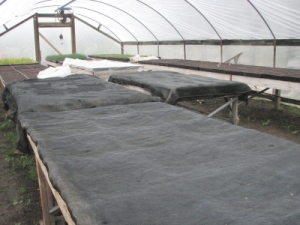 The greenhouse tables are full of flats. The covers are keeping birds from the sunflower sprouts.

Yes, it’s 2013 and the first tomatoes have been planted in the greenhouse, along with their warm weather loving partners, peppers and eggplant. The heaters and fans are being installed and checked. All of a sudden, the incubator is full.

The crew transplanting lettuce, as Paul pulls irrigation tape and row cover over the finished beds. 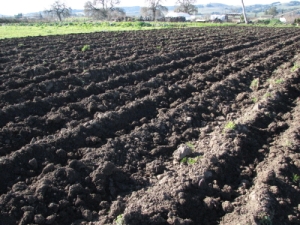 The fields are wet and cold but some ground has been turned and bedded up. Other areas have been planted with transplanted lettuces. And there are spots that are too wet to touch and will wait until later.

Everything happens fast. All of a sudden, we are in it, full tilt.

Potatoes are flowering. In the distance, rows of lettuce were transplanted yesterday, looking slightly like a rainbow, between the new raspberry rows.

This healthy Red Russian kale is so nice to see after several plantings have succumbed to devastating insect damage. 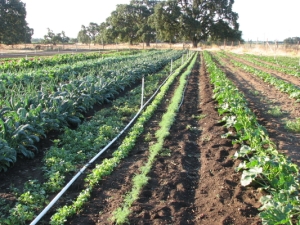 This field, with the enormous Valley Oaks in the background, is where the artichokes were last year. It’s becoming the herb zone because it is a little oddly shaped, perfect for small plantings of more perennial crops.

Lots of Sugar Baby watermelons. We’ll have them next week at the markets. Yummy.

Basil growing under covers to protect from the cucumber beetles.

The winter squash crop here is taking off.

Winter squash is flowering like mad and setting fruit to feed us later.

The Roadside Farm Stand has been so much fun. And the sensational garden in front is only just beginning!

Preparing for the Heat

It is supposed to be around 100 degrees today, a bit cooler tomorrow, not a heat wave but quite warm. The crew is busy with the end-of-week tasks, staying hydrated and covered from the sun. They will work just until noon today.

Pulling row covers over the basil to protect from the voracious cucumber beetles. 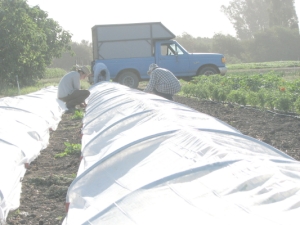 Once the covers are pulled over the hoops, large metal clips secure the material.

New artichoke plants were put in the ground yesterday. They need a good soak today.

The first three rows were planted a week ago. The others more than a month ago. The staked tomatoes are getting their first “tying-up” right now.

The weather determines so much on the farm. This year has been dry so far and Paul has taken every opportunity to keep planting and working the ground. Irrigation has been running during the day to keep the new beds of lettuce and leeks, peas, broccoli raabe, mizuna, arugula, spinach, carrots and turnips from drying out. We know these are crops that could rot, given a couple weeks of rain which is not uncommon here in January and February. But it’s also possible we will be flush with fresh, early spring bounty when we are most often quite thin, stretching to find product to sell. It’s worth the risk. 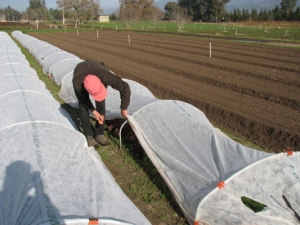 Planted last week, these tomatoes are snug as a... never mind. They are warm!

It feels like we’re turning a corner and off in the distance, I can feel summer. Our Tuesday night market begins May 3rd. The fields are in good shape (except where flooded last week) and the weather is becoming predictable. The first peppers were planted today, quite early but covered to keep the temperature up. Together, with the covered tomatoes, summer couldn’t be too far away, could it?

The market was very well attended this morning. We did sell out of salad, even with the extra we brought. Sold all the spring onions, radishes, kale, broccoli raabe, spinach and sunflower sprouts. And certainly all the most beautiful first fava beans. Favas for Easter equals sublime. 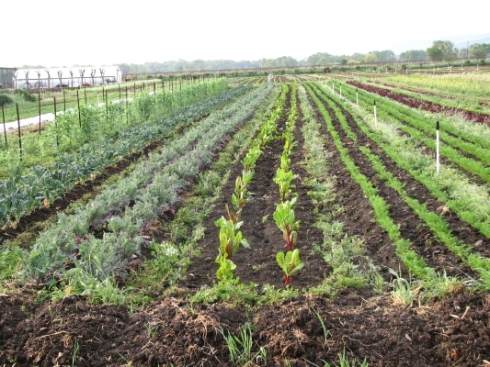 And peas are coming. You can see them climbing up the trellis poles on the left side of this picture. Paul’s planted both shelling and snap peas. After the peas, come lacinato kale, red Russian kale, chard and carrots. The sprinkler line intersects two plantings of carrots about a month apart. We’re hoping to bring the first carrots back to market in 2-3 weeks, maybe by the first Tuesday night market?

The on-going rain can dampen the spirit and worry the farmer. 2011 may well be one of the wettest springs in recent memory, with rain or showers predicted 10-14 days running. A couple posts back I noted the paths on the hills were drying out. I take that back. After days of rain, even the longer daylight is not reversing the soggy situation. And what about the low lands, the fields where we work to grow food for our local community. How do we manage such a deluge?

There are several strategies to manage a rainy spring. Crops that are being harvested and sold now are growing in 60-inch wide “beds” which is the distance between the tractor tires. The tire track, a compacted 12” swath on either side of the bed, becomes a path during harvest days and while it rains becomes a ditch to carry away water. Plants grown in beds are less susceptible to rot, because the root zone can drain more quickly.

Many of the salad crops are in beds and covered with plastic or floating row covers (agrifabric). Covering helps with warmth and insect damage, but in the rain and especially wind, can be problematic. This year, we have struggled to keep the covers in place in the wind. I saw an amazing YouTube video of plastic row cover in the wind. It reminds Paul of Christo’s “Running Fence” gone array. 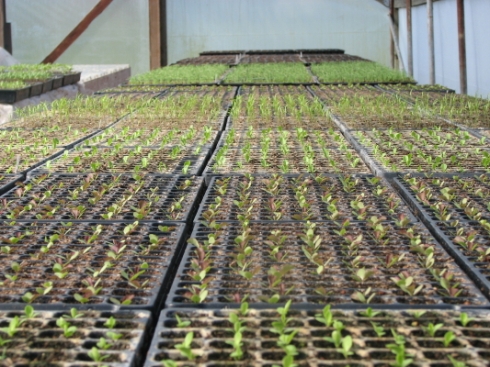 The greenhouses are another helpful tool. We have several crops that are grown entirely inside; pea shoots which get mixed into our salad and sunflower sprouts which we are selling separately right now. When the salad is in large part pea shoots, the lettuce and greens in the field are most likely difficult to pick. But most of the greenhouse space is given over to growing plants to be transplanted into the field; kales, chard, onions, head lettuces, broccoli, cabbages. Right now many plants are ready to go out, but they have no place to go. The fields are too wet to prepare, so those plants will end up in the compost because successive plantings in the greenhouse will be ready at the right time.

Sometimes it is helpful to look back at Paul’s “Top Secret” notebook, (his field notes over the years). For instance, first tomatoes were planted (under covers) on April 3rd in 2009 and 2008. Last year, they went in April 10th. There was 2 ½” to 3” of rain the first week of May in 2009. But the most noteworthy stat could be that 2008, ‘09 and ‘10 there were 5 to 6 plantings of cool season crops in March. So far this year there have been no planting days. The repercussions of that are obvious. We will have less to sell a couple months from now. Thankfully, we had a dry January and were able to plant. Some of January’s crops are those we are picking now.

We hope for dry weather soon and that those first crops explode with growth.

The arugula under the covers is fleshing out nicely. The remay covers are lightweight fabric which keeps the tunnels warmer, drier and bug-free. We have been taking arugula to market that is going to flower, for the past few weeks. It is quite spicy and stemmy. Chopping it like cilantro or basil, as one would any herb, is a strategy I adopt when it gets like that. I’ve even made an arugula “pesto” which is delicious. This succulent new arugula will be at Friday’s farmers’ market.